I was 30 years old. My house was paid off, I had $90,000 in cash, and I was ready to step foot in the real estate market and buy my first rental house.

“Don’t do it. Renters will tear up your house and you’ll lose your shirt.” was the advice of the masses…

“Real estate is one of the best investments you’ll ever make if you do it right.” was the advice of the few…but also the wealthy…

Naturally, I decided to ignore the advice of my broke friends and family and instead heeded the advice of the rich. But, would this lead to my ultimate wealth? Or would this decision just trudge me through the gates of hell with seemingly no escape?

Three years later, I have your answer…

It was 2015. Real estate prices were climbing, but there were still some deals to be found. After a few months of studying the market, walking through houses, and putting bids in on places and getting rejected, one intriguing property was actually starting to pan out.

I officially owned my first rental house! And now it was time to find out for myself — Would this real estate investment be worth it? Would my wealth grow faster than I imagined? Or would my crazy renters start changing their motorcycle oil in my living room and trash my house from the inside out?

Here’s how the story unfolded…

I was new to this landlord/renter game, so I didn’t have a bunch of people that could lead me to good renters, and I certainly didn’t have a history of past renters that I could reach out to either. I had to start from scratch.

So, when you have something to offer to the masses for a price, where do you go?

Haha, sounds like a terrible idea, right? Well, it could have been, but thankfully I paid cash for the investment property and therefore wasn’t in a massive hurry to get any old Joe-Shmoe in there to cover my mortgage.

Instead, I followed the simple steps below to find quality renters

With these simple steps, I landed some renters: three buddies that were fresh out of college with new jobs, trying to find their place in the world…

I bet this is where you’re assuming the story takes a turn for the worse:

But nope. These guys were awesome! They were clean, quiet, and always paid on time. And most of this was thanks to my slow and tedious back-ground check. 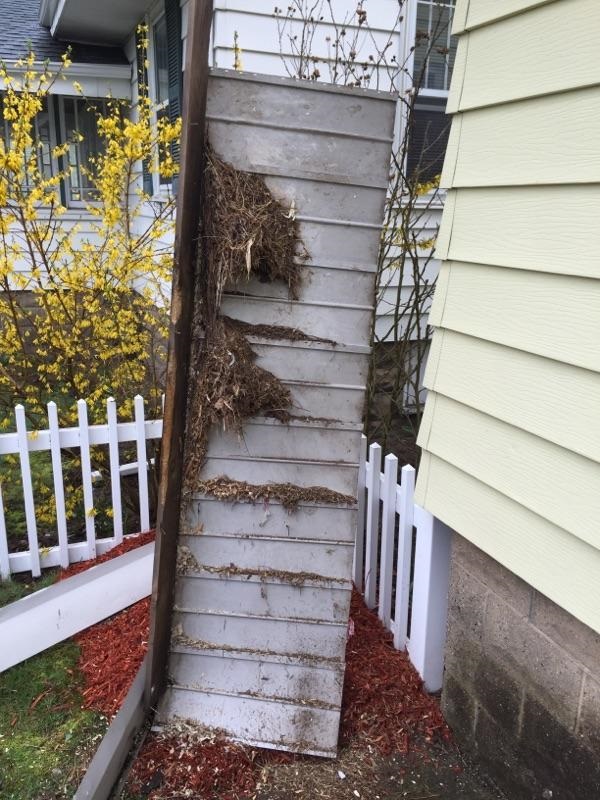 So how about the property? Was this first rental house rock-solid and never in need of any repairs?

The renters moved in on April 15, 2016. They called me on April 21st…just 6 days later… The front fascia fell off the front of the house.

Really…was this what land-lording was going to be all about? Me heading over to the house every week to fix something…? Well, that’s what all of my broke friends quickly lead me to believe. But, after taking about 2 hours (and just $10) to fix this, everything stayed functional for the next 8 months.

Over the next couple years, I have had to call in some repair guys for the furnace ($400) and had to get the water heater replaced ($1,100), but the process wasn’t really all that bad. And again, since we paid cash for the house and always had a cash reserve for any potential repairs, these “surprises” weren’t really all that earth-shattering. Stuff’s going to break…you just need to have some cash at the ready when it does.

All in all, the repairs of the house took up mayyyybe 20 hours of my life and less than $2,000 in total. For 3 years of land-lording, I’d say that’s not too shabby!!

So now it’s time to get down to the dollars and cents. How much did I actually earn with this venture? And was it worth it? Let’s crunch the numbers!

The expenses (things like property tax, insurance, furnace repairs, the front of the house falling off…), were as follows:

So far, you might not be overly impressed with the rate of return on these properties. On average, I’m bringing in $10,000 a year, but remember, we paid just $81,000 for the property and were ‘all-in’ at $89,000 after the initial repairs. That means that my rate of return each year has been about 11%!

Not too shabby! But you know what? The story gets even better. A LOT better.

Over that 3-year stretch, the property has gone up in value nearly two-fold — from $81,000 to $155,000. I bought it cheap, the location was great, and the overall market has just gone crazy!

So what’s the rate of return including the appreciation of the property? 26.6%!!

Related: What the Heck is Market Value?

Heaven or Hell? Closer to the Former Than the Latter

So has my experience been hell? Nope. Far from it.

The tenants have been amazing, the money has been awesome, and the time investment has been minimal. Over the next few years, we’ll most definitely invest in another another place and rent it out just like we did with this one.

How about you? Have you been thinking about investing in your first rental house? Are you ready to pull the trigger? I say go for it!

Derek is a finance junky through and through - both at his day job and for his blog, LifeAndMyFinances.com. He is kicking tail when it comes to money and is always looking to help others as well. Be sure to check him out!!

link to How do I find a good home appraiser?

When you hire an appraiser, you are hiring someone to provide their opinion. Granted this is an unbiased and professional opinion based on analyzing data and forming that opinion,...

Continue Reading
link to What are the 10 Hottest Housing Markets in 2020?

Affordability is the name of the game in 2020 and the 10 hottest housing markets in the US, as ranked by the National Association of Realtors (NAR), are all very similar. They all...